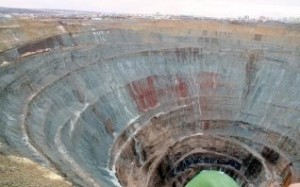 Africa’s diamonds began in 1866 with the discovery of a 21.25-ct. rough diamond on a farm south of Kimberley, South Africa. There is evidence of other discoveries, some as early as 1854. But the “Eureka,” as it was called, was the first to be authenticated.

After the Eureka, almost three years passed without major discoveries, and interest in diamond exploration faded. Then in 1869, the Star of South Africa-a magnificent 83.50-ct. rough diamond-renewed diamond fever. Prospectors searched the banks of the Vaal river, where it was found. They unearthed more diamonds nearby and the real rush began.

People came to the diamonds fields from all over the world in search of opportunity and riches. Most of the early prospectors were English, but some came form other European nations, some from North America, and some from Australia.

Diamond prospectors, called diggers, paid wages to field workers, so many South African men traveled long distances to work in the mines. Most of them left families behind for the first time, but the promise of regular wages, and money to return home with, made the journey worthwhile.

Diggers combed through the gravel and staked claims up and down the Vaal River. An estimated 10,000 people poured into the area and set up a string of camps. Meanwhile, a few diamond finds in the surrounding hot, dry plains caught the attention of some prospectors. Some of those finds were accidental: One man discovered a handful of small diamonds while mixing mud to build his house.

Soon, there were enough discoveries to attract some diggers away from the crowded riverbed. There, they started the first dry diggings. Away from the river, they needed only picks and shovels. And they didn’t have to stand in water for hours or risk a flooded claim.

Kimberley
Those dry diggings led to the discovery, in 1869, of deposits that became the Bultfontein and Dutoitspan mines. Both were located in what was to become the booming diamond town of Kimberley. These discoveries and those that followed in 1870 and 1871 – including the deposits that became the De Beers and Kimberley mines – changed the diamond industry and South Africa forever.

Today Kimberley is a modern city of over 100,000, but back then it was a makeshift mining town. It materialized out of the barren surroundings almost immediately after the first diamond discoveries. The first to arrive were the diggers: Within a short period of time, they set up residence in thousands of tents that cluttered the countryside. Some historians estimate that at one time, the population of Kimberley – including diggers, their hired laborers, and their family members – reached as high as 50,000.

In those early days, Kimberley was a fairly peaceful town. Its residents were generally law-abiding, and few of them owned guns. The Diggers’ Committee, a citizens’ group formed to keep the peace, dealt with the isolated incidents of armed robbery and drunken brawling.

At first, supplies had to be brought in by oxcart from Cape Town, a difficult two-week journey. As a result, even food and everyday grooming needs were expensive. But the population’s size and vitality soon attracted entrepreneurs to the area. Shopkeepers arrived to supply the town with its basic needs. Rustic hotels and bars opened up to provide them with food and drink. On market days, farmers from distant farms brought wagon loads of produce and livestock to sell. Diamond buyers set up shop in tents or bought rough directly off the diggers’ sorting tables.

Wood – needed for construction as well as for fuel – was scarce. Public buildings were constructed out of corrugated iron and canvas. And many residents burned oxen droppings for heating and cooking.

The First Miners
A diamond yield often contained hundreds of claims, all individually owned. One or two diggers worked each 30-ft. by 30-ft. (about 9-m by 9-m) claim, sometimes with the help of hired laborers.

The diamond-bearing material near the surface was relatively soft and workable. The diggers called it yellowground because of its yellowish color. They hoisted it out of the pits and broke it into smaller pieces, then moved it to the sorting tables. After sorting, the yield from all that hard work often consisted of only a few small rough diamonds.

As the claims deepened and narrowed, the yellowground ran out. Underneath, miners found blueground, or unoxidized material. Blueground had a bluish to gray color. It was harder and tougher because it hadn’t been softened by exposure to air and light. Most diggers assumed that the diamonds ran out when the yellowground did, and many of them gave up their claims.

For those who decided to go deeper, the greater depths made mining more complex, and much more dangerous. Rock slides and flooding proved disastrous. Because of the added depth, miners needed more elaborate equipment, which meant more expense. Theft and smuggling ate up profits. To make matters worse, the growing supply of diamonds caused prices to drop in Amsterdam and Antwerp, then the centers of the cutting industry.

To combat rising mining costs, some of the diggers formed partnerships and small companies to buy abandoned claims. The purchase of multiple claims made it possible for diggers to expand their operations over wider areas. This made it more difficult for solitary claim holders to survive. Some moved on to areas where could still work with the shallower yellowground and use less expensive equipment. Some turned to mining gold when that precious metal was found in territories farther north in 1885.