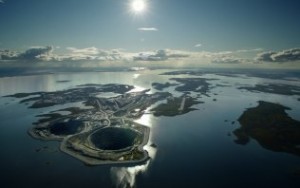 Diamonds are more available and affordable today than at any other time in history. Almost anybody who wants a diamond can afford to own one. At the same time, while diamonds are relatively abundant, diamonds with high clarity and good color are still quite rare.

Diamonds form under tremendous temperature and pressure. Then they’re brought to the earth’s surface in cataclysmic(sudden, violent charge) eruptions at rare times throughout the earth’s long history. The geologic process that brings diamonds to the surface is so violent and explosive that it’s a miracle that diamonds survive it. In fact, large crystals rarely survive intact.

Diamonds owe their incredible durability and beauty to their formation process. Formation under just the right temperature and pressure conditions results in the crystal structure that causes diamond’s supreme hardness and desirable optical properties. If there’s a slight variation in temperature or pressure, or if the diamonds take too long to reach the surface, the result is graphite, not diamond.

Once gem-quality diamond crystals are delivered to the surface, they often survive millions of years of battering in rivers, streams, and ocean tides. Many are even incorporated into new sedimentary rocks, re-released into the environment by weathering, and transported many hundreds or thousands of miles without significant damage.

That’s the case with the diamonds of Namibia, on the western coast of Africa. The diamonds arrived at the earth’s surface millions of years ago in the African interior. Then the forces of erosion released the diamond crystals from the rocks around them and gems were gradually washed westward in the Orange River to the Atlantic Ocean, creating what might be the world’s largest deposit of gem-quality diamonds.

Estimates of the number of diamonds on and near the coastline run as high as 1.5 billion carats. Experts also think that between 90 and 95 percent of them are gem quality. The percentage is high because crystals with large fractures and other structural defects don’t survive the journey between the continental interior and the ocean. Only the strongest gems make it.

While technology has made the job of locating diamond deposits easier and more efficient, prospecting for diamonds is still a costly proposition. And diamond exploration isn’t for the faint of heart. Because of the vast capital outlay needed to find and develop a mine, mining companies need huge financial resources. And they must think of time in terms of decades.

Finding the diamonds is only part of the process. Once prospectors locate a promising area, the mining company must spend additional time and money to develop it. Canada’s Ekati mine took years of exploration to locate, and more than $700 million to develop, but the potential profits are huge. Experts consider Ekati’s unmined diamond reserves to be in excess of $8 billion at current prices, and project a 25-year lifespan for the mine.

There are many places around the planet that might contain diamond deposits, but not all of them do. And not every diamond deposit is vulnerable enough to develop into a profitable diamond mine. Mining companies must consider several factors when they decide whether or not to develop a mine at a given site.

They have to consider how many tons of diamond-bearing rock a deposit might contain, as well as the concentration of diamond rough within the deposit and the size, quality, and value of the diamonds themselves. They also consider the location and accessibility of the diamond deposit as well as the host country’s political stability and legal requirements, like taxes and environmental legislation.

Even the smallest diamond must be located and mined, which represents an enormous investment in time and money. As a result, the costs of finding and mining diamonds are significant factors affecting overall diamond value.