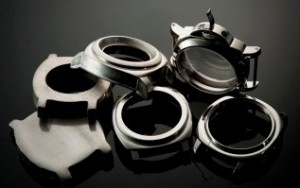 CRYSTAL: The transparent cover over the watch face is called the crystal. There are 3 types of crystals commonly found in watches:

BEZEL: The surface ring on a watch that surrounds and holds the crystal in place is called the bezel. A bezel can be plain or adorned with decorative accents like gemstones, diamonds or other details. They can be stationary or they can rotate to perform different functions. A rotating ratchet bezel moves in some sport watches as part of the timing device. If rotating bezels are bi-directional (able to move clockwise and counter clockwise), they can be used with a watch that has a stopwatch function to calculate elapsed time. This function is called tachymeter.

CROWN: The button extending from the watch case generally on the right side of the face that is used to set the time and/or date, and to wind the watch in manual watches. The crown is often referred to as the winding stem. Most pull out to set the time. Many water resistant watches have crowns that screw down for a better watertight seal. Some watches have a jewel inset into the tip of the crown, which is called a Cabochon, which is a visual sign of a high quality watch.

DIAL: Also known as the face of the watch. It gives the watch its beauty and character. The dial or the face is the part of the watch that contains the numerals, or hour indicators and surface design. The numerals or hour indicators can be applied, printed or painted on the dial. Some watch dials have diamonds or gemstones in place of numbers. Some watches have Roman numerals, some have limited numbers, and some like Movado have no numbers or markers at all on the dial except at 12 o’clock. Dials can be made of metal, gold, silver, gold tone, two tone, mother-of-pearl, enameled, pink toned gold or patterned.