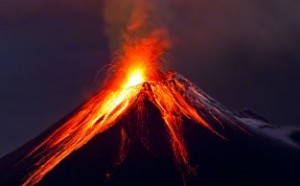 In our previous blog, you’ve learned some basic information about how and where diamonds form. But unless those diamonds are also delivered to the surface, there’s no way to access them. Indeed, there might be vast deposits of diamond that will remain in the mantle forever.

After formation, if conditions remain constant, diamonds might remain underground for hundreds of millions of years before they’re carried to the surface. But the delivery itself is rapid. It has to be: Under the inner earth’s extreme heat conditions, any diamonds that spend too long under decreased pressure won’t survive.

Diamond Transport and Delivery
Diamond deposits are found in two types of rock: kimberlite and lamproite. Their mineral and chemical compositions are fairly similar. The main difference between them is that, while kimberlite tends to occur in the middle of cratons, lamproite is commonly found at the edges of cratons, or even in the zones immediately around them. The Argyle mine in Australia is an important lamproite diamond source.

Kimberlites and lamproites have been pushed up to the earth’s surface for billions of years. Sometimes, they carried diamonds with them. The process, whether the materials contain diamonds or not, is called emplacement. The first diamond-bearing emplacement probably occurred more than 2.5 billion years ago, and the most recent was probably around 20 million years ago.

It’s important to remember that kimberlites and lamproites aren’t the rocks that diamonds form in – they merely carry already formed diamonds to the surface. This distinction wasn’t always common knowledge. It wasn’t until scientists developed the technology to measure a rock’s age that they determined diamonds were millions or billions of years older than the rocks that transported them.

Heat trapped deep within the earth keeps portions of the mantle in a melted, or molten, state. The molten rock material, called magma, expands as it heats up. The heated magma rises, just like the warm air in a room rises toward the ceiling. As the magma rises, it begins to cool. Cooling causes it to contract and get heavier, so it begins to sink. As it descends, it heats up again, starting a new upward cycle. These constantly repeating cycles of heating and cooling, rising and falling, are called convection currents. They keep the partially molten layer of the mantle in constant motion.

If the mixture of chemical elements is right, the magma will form kimberlite or lamproite. If, as it rises, it meets an already-existing deep fracture in the crust, it will continue to move upward. If the rising kimberlite or lamproite passes through a diamond deposit, it will pick up and carry already-formed diamonds. The diamonds might remain embedded in boulder-sized pieces of the peridotites or eclogites in which they formed. But often the magma is so hot that it dissolves the surrounding rocks, releasing the diamonds into the rising mixture.

As the upward-moving rock mixture rises toward the surface, the pressure above it decreases. With less pressure holding it down, the magma gradually picks up speed. By the end of the journey, it’s moving very fast. Withing the last 1.5 miles, scientists estimate that its speed is about 186 miles per hour. The decrease in pressure also allows some of the fluids in the magma to expand into gases. Those gases are mostly water vapor and carbon dioxide, so they act like the gases in a shaken bottle of a club soda or champagne.

The combination of speed and expanding gases is powerful enough to force the rising rock mixture to explode through the surface. As kimberlite blasts through the crust, it creates a deep carrot-shaped formation called a pipe. Lamproite emplacement works the same way, but its pipe is wider at the top, so it’s shaped more like a mushroom than a carrot.

The expansion of gases and the speed of delivery are important for the survival of the diamonds. This combination keeps the diamonds from converting to graphite, which would happen if they were exposed to high temperature along with decreased pressure for a long period. In a few places, geologists have found deposits containing diamond-shaped masses of graphite that probably began the journey from the earth’s depths as diamond. Changing temperature or pressure conditions during the upward journey changed the diamond to graphite.

Arrival at the Surface

The kimberlite – or lamproite – doesn’t flow out of the pipe like lava from a volcano. It solidifies while it’s still very hot, so by the time it reaches the surface it has changed from liquid to solid. The explosion is a mixture of solid rock, ash, and gases. After the mineral explodes through the overlying rock, most of it falls back into its pipe, along with its diamond cargo. What’s left is a deep diamond-bearing pipe, topped off by a shallow crater.

Sometimes – millions of years later in some cases – new emplacements can occur within older pipes. In fact, it’s possible for several emplacements to occur in the same pipe. The “new” diamonds often have different features from those delivered during earlier episodes.

Kimberlites are widespread – in the 1990s, there were about 6,000 of them known worldwide. But fewer than 1,000 of them contained any diamonds. Of those, only about 50 had enough diamonds to be economic to mine, and only about 20 are still being mined today. With statistics like that, it’s no wonder diamonds are considered rare and precious!