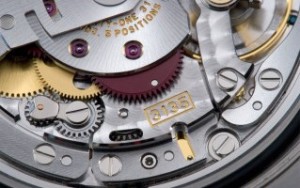 All watches can be classified as Mechanical or Quartz.

Quartz watches are powered by a battery and work with a series of circuits. These circuits work to regulate the vibrations of the tiny piece of quartz crystal, which are used to mark off the passage of time. Quartz watches are less expensive than mechanical watches and are more accurate.

The MAIN difference between a Quartz watch and Mechanical watch is the Power Source.

Mechanical: This watch’s power source is a mainspring inside the watch, which creates energy as it gradually unwinds. This energy causes the balance wheel to vibrate back and forth more than 28,800 times per hour. This vibration creates the energy to make the mechanical gears turn and move the hands to tell time. There are two types of mechanical watches: Manual and Automatic
The spring on a manual watch is wound by manually turning the crown, as pictured below.
Winding terminology

The spring on an automatic watch is wound by the random movement of the wearer’s arm, which causes a tiny rotor inside the watch to swing like a pendulum. It is the movement of the rotor that winds the main spring of an automatic watch.
Quartz: This watch’s power source is a battery that supplies energy to circuit. The circuit keeps a tiny piece of quartz crystal vibrating at a consistent rate of approximately 32,768 beats per second. It is the consistent vibrations that make a Quartz watch extremely accurate. Quartz watches can fall into 3 categories:
Battery Powered
Light/Solar Powered
Kinetic (Motion) Powered

The difference in these 3 types of quartz watches is the source of power that keeps the piece of quartz vibrating: