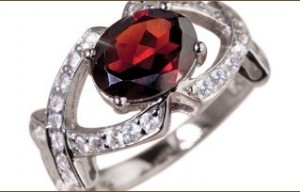 Garnet, the birthstone for January, signifies eternal friendship and trust and is the perfect gift for a friend. Garnet, derived from the word granatum, means seed, and is called so because of the gemstone’s resemblance to a pomegranate seed. References to the gemstone dates back to 3100 B.C., when the Egyptians used garnets as inlays jewelry. Garnet is the name of a group of minerals that comes in a rainbow of colors, from the deep red of the pyrope garnet to the vibrant green of tsavorites. Today, the most important sources for garnet are Africa, Sri Lanka, and India.