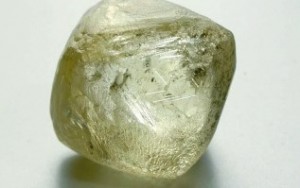 Diamonds form deep in the earth under extreme heat and pressure, then transported violently upward until it arrives at or near the earth’s surface, where it’s forced from its hiding place by nature or by man. Then it’s cut and polished until its natural beauty shines through.

Diamond’s splendor has been appreciated for centuries, but there was not much scientific knowledge about it before the twentieth century. Since then, research by chemist, physicists, geologists, and mineralogists has added to the world’s understanding of diamond. In the past 50 years alone, scientists have learned a lot about how diamonds form and how they’re transported to the surface. This has made it easier to predict locations for new diamond discoveries.

Extremes of temperature and pressure can cause dramatic changes in any substance. Water, for example, freezes into a solid at very cold temperature. But ultrahigh pressure will also “freeze” water into a solid. (The water quickly returns to its liquid state when the pressure is relieved.)

Temperature and pressure are even more powerful when they work together. The combination is what causes diamond’s atoms to link together in the special way they do. As you’ll see, this unique bonding of its atoms is what makes diamond the hardest substance on earth.

What Diamonds Are Made Of

From the time of its discovery, there was no answer to scientists of what diamonds were made of until the late 1700s.

In 1772, French chemist Antoine-Laurent Lavoisier set a diamond in an oxygen-filled gas jar and used a magnifying glass to direct a concentrated beam of sunlight on it. The diamond burned, but instead of leaving a pile of ash, it vanished completely. Lavoisier noted that the only byproduct of the process was carbon dioxide gas. When he burned charcoal using the same method, the same byproduct resulted.

Years later, English chemist Smithson Tennant picked up where Lavoisier left off. He converted identical weights of diamond and charcoal to exactly the same volume of carbon dioxide, proving they were essentially the same substance in different forms. He published his results in 1797.

It took twenty years for the scientific community to accept Tennant’s findings, but eventually (and through further experimentation) all had to admit that the mystery had been solved: Diamond was composed of carbon. 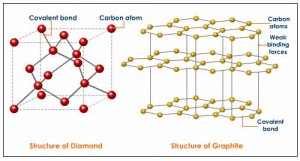 Graphite is another material that’s made only of carbon. Carbon’s atomic symbol is the letter C. This makes “C” the chemical composition of both diamond and graphite. But their properties are very different. Graphite is soft and slippery – an excellent lubricant. It’s also used in pencils, where its softness allows it to rub off easily onto paper. Diamond, however, is the hardest mineral substance on earth.

The difference between diamond and graphite lies in the way their carbon atoms fit together. This is caused by the different pressure and temperature conditions that exist when either mineral is forming. Graphite’s atoms are arranged in strongly bonded layers, but the layers have only weak bonds between them. In diamond, the atoms are arranged in tight three-dimensional patterns, bonded more strongly – in all directions – than graphite’s atoms.

Compare holding your palms parallel to each other and rubbing them back and forth. Even with your palms and fingers touching, you can easily slide your hands in opposite directions while still holding them parallel. This is an example of graphite’s bonding. Now, clasp your hands together tightly, with your fingers interlaced. You’ll notice that it’s almost impossible to break the bond. Diamond’s crystal bonds work roughly the same way.

Planet Earth formed about 4.6 billion years ago. It solidified from the clouds of gas and dust that made up the solar system. As the mass spun slowly, the denser materials were drawn toward the center and the lighter materials settled into the outer layers.

Although the earth is actually a little flattened at the poles, it’s usually pictured as a sphere. From where you’re sitting, it’s about 3,900 miles to the center. The earth’s three main layers are the crust, the mantle, and the core.

The first layer is the crust. It’s a layer of hard, strong rock that’s extremely thin compared to the layers beneath it. Its thickness ranges from about 3 to 25 miles, although it can be much thicker under mountain ranges. The crust is thinnest under the oceans.

Beneath the crust is the mantle, which has a maximum thickness of about 1,790 miles. Structurally, the mantle is rocky near its outer surface, more fluid at its deeper levels. Geologists sometimes divide the mantle into the upper mantle and the lower mantle, with the dividing line at about 620 miles beneath the surface.

Under the mantle, the earth’s core consists of a molten layer that’s about 1,410 miles thick, and a solid center about 1,490 miles in diameter. Much of the earth’s inner heat radiates from the core: At about 11000°F, it’s as hot as the surface of the sun! The only thing that keeps the center solid is the extreme pressure at that depth – more than 1 million times greater than the earth’s atmosphere at sea level.

The Right Temperature and Pressure Conditions

Scientists have been trying for centuries to find just the right combination of conditions for synthetic diamond production. In the last half of the twentieth century, this research resulted in scientific advances in the study of ultrahigh pressures. Today, the technology is used often in a wide variety of applications, including diamond synthesis.

After years of careful research, scientists were able to estimate the conditions required for natural diamond formation: a temperature range of 1652°F to 2372°F and pressure between 45 kilobars and 60 kilobars.

A kilobar is a unit that scientists use to measure extremely high pressure. The normal, everyday pressure on earth at sea level is about one bar, and a kilobar is 1,000 times that. But a diamond really feels the pressure. Forty-five kilobars is 45,000 times normal pressure: an incredible figure!

Armed with information about the temperature and pressure conditions necessary for diamond formation, modern geologists studied the kinds of rocks that accompanied diamonds to the surface. They also studied the mineral inclusions trapped within existing diamonds. Then they compared those findings to what they knew about the conditions and minerals at different levels inside the earth.

They concluded that the right temperature and pressure conditions exist in very limited areas of the earth’s upper mantle, between 90 miles and 120 miles beneath the surface. At that depth, those ideal conditions work together to force carbon atoms to form the extremely strong bonds found in diamond crystals.

The best temperature and pressure conditions for diamond formation exist under large, geologically stable parts of the crust called cratons. Cratons are the oldest sections of the landmasses. They make up the interior portions of the continents, where they’ve existed without change for millions of years.

Cratons exist only as parts of continents: There are no cratons under the oceans, where the crust is thinner. As far as scientists know, this makes the conditions under the earth’s oceans unsuitable for diamond formation. 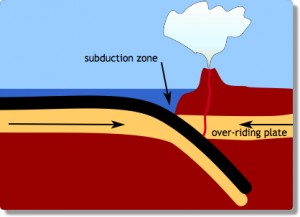 The basic requirements for diamond formation are precise temperature and pressure conditions in the right combination, and an environment rich in carbon. By studying the inclusions in diamond crystals as well as the rocks that accompany diamonds to the surface, scientists found that diamonds form in two different types of igneous rocks. (Igneous rocks start out in a molten or partially molten state and become solid when they cool.) The two types are called peridotite (pe-RID-o-tite) and eclogite (EC-lo-gite).

Peridotite and eclogite have different mineral compositions. Each one exists under precise temperature and pressure conditions at specific depths within the earth. Each one also provides its own supply of carbon and releases it under different conditions. There’s evidence that each one produces diamonds with characteristics – and different – crystal forms and inclusions.

Peridotite, where most diamonds form, probably existed from the time the earth first formed. Peridotite’s carbon was trapped in the most ancient of the earth’s rocks. The rocks release their carbon as they melt in the earth’s inner heat. Because there’s plenty of available material, the carbon-releasing process is fairly consistent. To scientists, this means that the carbon needed for diamond formation is always present. It also means that diamond formation might be happening, miles beneath you, as you read this.

Eclogite’s carbon is contained in ancient rocks that are closer to the earth’s surface. Eclogite is a younger rock than peridotite, and occurs at much shallower levels. Its carbon comes partly from organic matter like ancient plants and animals, which didn’t exist when the earth first formed. Those plants and animals become part of the eclogite, and their carbon is released when the crustal rocks containing them are dragged deep into the earth in a process called subduction.

Subduction occurs when two of the earth’s crustal plates collide and one is forced under the other. The lowered plate heats up, causing its component minerals to melt and release their trapped carbon. Because it’s dependent on this process, the release of carbon from eclogite isn’t constant. Eclogite’s diamonds tend to be younger than peridotite’s diamonds.

In both peridotite and eclogite, if temperature and other factors like pressure and chemistry are favorable, the carbon atoms released by the melting rock bond to build diamond crystals.