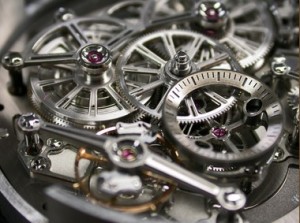 Where did the term ‘Horology’ originate?

While the exact origin is unknown, an early use of the term is as follows. The ancient Roman water clock was known as a Horologium, and after the fall of the Roman Empire, many Latin-speaking cultures adopted variations of the name to describe subsequent timekeepers. Some of those variations were: horloge, orloge, orologio, orloige, and oreloige.
Centuries later, in 1656, Christian Huygens invented the first Pendulum clock, based on Galileo’s design. Seventeen years later, in 1673, Huygens chronicled the invention (among others) in a book entitled: Horologium Oscillatorium. Then around 1751, Abbe’ Nicholas Louis de Lacaille borrowed the term to name an obscure constellation in the southern hemisphere (“the pendulum”), thus honoring Huygens’ invention. The name was later shortened to Horologium, and thus the term ‘Horology’ has been used to describe “the science of measuring time”.