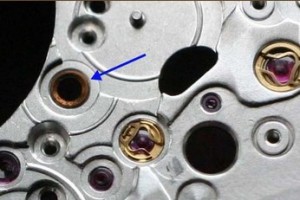 Jewels are often used in top quality wristwatches, not just externally for decoration but also internally for functionality. The hard surface of the jewels has a lower friction coefficient with metal, which increases the accuracy and lifetime of the watch. Jewel bearings were invented around 1702 by Nicolas Fatio de Duillier and Pierre and Jacob Debaufre. At the time, many watches used minerals such as garnet and quartz. Jewels such as sapphire, ruby and diamond were only found in the highest quality watches. However, after 1902, more wristwatches were able to use synthetic sapphire and ruby after the ability to grow jewels in the lab was perfected.

Function of Jewels Inside a Watch

Jewels are used in the escapement of the watch on impulse pin and pallets. They are also used in the bearings as cap jewels in arbor and as hole jewels to support the arbor. The number of jewels used inside the watch has increased over the past few years as the jewels are becoming less and less expensive. The only essential part of the watch that needs to be jeweled is the gear train that connects the mainspring barrel to the balance wheel because it is always under pressure from the mainspring. At first, jewels were only applied to balance wheel pivots that move fast and are thus under great pressure, since friction has more impact on faster moving wheels. As more jewels were added on the train going toward the barrel, they were also placed on the slower moving wheels.

Contrary to what people might believe, adding more jewels to a watch does not increase the accuracy or prolong the lifespan of the watch. The wheels on the balance wheel that are responsible for the accuracy of a watch are already jeweled, and the rest of the wheels do not have enough wear to require jewels. Many manufacturers have tried in the past to equate more jewels to better quality of the watch. Thus, they often added more wheels and jewels to their watches, even using jewels that have no function in the watch, just for advertising purposes. In 1974, International Organization for Standardization prohibited manufacturers to use nonfunctional jewels in the jewel count for advertising. Yet, many have found a way to get around it by adding more wheels with jewels that don’t necessarily have to be there since they don’t increase the accuracy of the watch.

You can be certain, however, that Rolex values simplicity and functionality in a wristwatch as well as its dedication to presenting the best quality in a luxury wristwatch. A typical Rolex watch uses 17 to 30 jewels in its movement – guaranteeing the best without adding any excessive and unnecessary jewels.