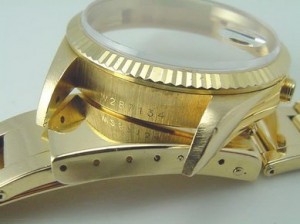 Every Rolex timepiece can be identified by two numbers engraved in between the lugs. The easiest way to find these numbers is by taking the bracelet off, as they are hidden behind the end pieces. The case reference number, which indicates the model number of the Rolex, can be found in between the lugs at the 12 o’clock position. The serial number can be found at the 6 o’clock position.History Behind the Serial Number

It is believed that Rolex began issuing a unique serial number to every timepiece to distinguish each individual wristwatch from another. The numbering system began around 20,000 and is a very useful tool for identifying approximately how old a timepiece is, especially vintage ones. Rolex continued to use this numbering system until the 9,999,999 mark was reached. From then on, letters were incorporated in the numbering system. The serial number that can be found on timepieces made in 1987 and onwards now have a letter that precedes a number. The letter “R” was first used in this new serial number system, and has (thus far) been followed by “L”, “E”, “X”, “N”, “C”, “S”, “W”, “T”, “U”, “A”, “P”, “K, “Y”, “F” and “D.”

Around 1952/1953, Rolex began another dating system that was stamped inside the caseback of each timepiece. This system lasted until the 1970s and included the following code: a Roman numeral followed by two numbers. The Roman numeral refers to the corresponding quarter of the production year. For example, the Roman numeral “II” indicates that the timepiece was made in the second quarter of a year, e.g. January-March. The two numbers that follow the Roman numeral indicate the production year in the 20th Century. For example, “IV63” means that the watch was produced in the fourth quarter (Oct-Dec) of 1963.